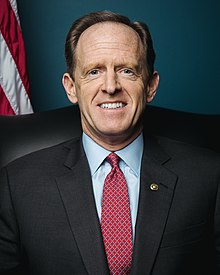 Tell Senator Toomey that Gun Control is not the Solution!

In a stroke of irony, gun-grabbers are using the recent shootings in Buffalo and Uvalde to push federal legislation implementing middle-of-the-night gun confiscation raids.

Unfortunately, unprincipled Senators who campaigned on supporting gun rights are talking favorably about it. 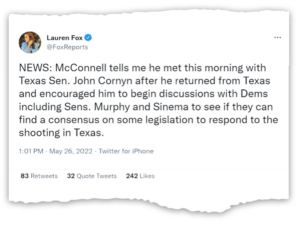 Senate Republicans are looking for a compromise, and Minority Leader Mitch McConnell has tasked a high-ranking Republican in the Senate to work out a compromise which will undoubtedly entail more gun control.

The Second Amendment is in a crisis, which will become a major defeat unless you act fast and decisively.

We can see New York’s gun control did nothing to prevent the attack at a grocery store in Buffalo. Even though the Buffalo shooter was briefly in a mental hospital for examination, and New York passed one of the toughest “Red Flag” gun confiscation laws in the nation back in 2019, the shooter was NOT RED FLAGGED.

In fact, these laws are devilishly incapable of identifying dangerous people, and instead focus on middle-of-the-night raids that endanger law-abiding gun owners. The most horrid of these “no Due Process” raids have resulted in good people being shot to death at 5 a.m. in their own homes by police for the crime of “Being a Law-Abiding Gun Owner.”

A little over a week after the Buffalo incident, an 18-year-old in Uvalde, TX, decided he wanted the same media coverage that the Buffalo shooter received.

Texas schools have the option of arming teachers in order to protect kids from this sort of tragedy. Robb Elementary chose not to do so.  The result was the tragic carnage we witnessed.

If Chuck Schumer and the left are allowed to succeed, this will lead to dozens of additional school shootings — sooner, rather than later.

We at GOA identified Senator Pat Toomey as someone who may possibly support a bipartisan effort to enact gun control. Please take this time to urge Senator Toomey to fight back AGAINST gun control (by using the form above) and not compromise on your rights.