But Mike needs your help on November 8th.

Mike is facing off against the anti-gun Democratic challenger, Summer Lee. As a state representative, Summer Lee has a 0% pro-gun voting record, earning her an “F” rating from GOA. 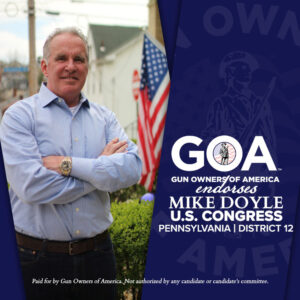 You can be certain that Summer Lee will back even more Draconian gun control measures in Congress. So, unless we elect a pro-gun majority on November 8th, no end will be in sight.

That’s why we need to send Mike Doyle to Congress on November 8th.

Joe Biden and his anti-freedom friends do not want Second Amendment supporters like Mike Doyle in Congress. They will target him as they do every candidate who believes in the Constitution and personal freedom.

Mike earned GOA’s support because of his high marks during our rigorous Candidate Endorsement process and where he earned a 100% score on our 2022 gun rights candidate survey.

You can help Mike get the help he deserves by volunteering for his campaign, making a financial contribution, and showing up to vote on November 8th.

GOA encourages all gun owners and sportsmen to stand against Joe Biden’s gun control agenda by voting for Mike Doyle for Congress in Pennsylvania’s 12th Congressional District on November 8th.